EXCLUSIV  Lovers of rocks are expected at the Museum of Geology 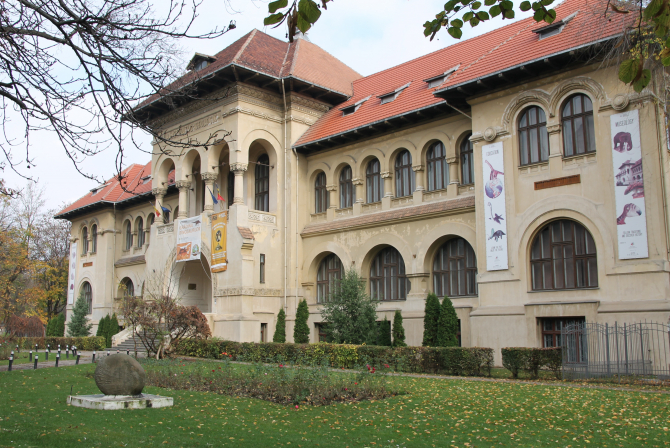 November is an ideal month for an incursion into... Earth's history! Few visitors to the Capital would think that here they can find a gate to the beginning of the Universe. An imposing building, in the center of Bucharest, an architectural monument built in the neo-Brancovan style, following the project of the renowned architect Victor Stefanescu, at the beginning of the 20th century, opens that unseen path that connects our world with the one from the beginning, from the Big Bang. We just have to cross the threshold to follow in the history of the World.

It's the Museum of Geology. The building was originally intended to house the Geological Institute. King Carol the First signed, in 1906, the royal decree establishing the institute, an act that can be seen, in original, even in the entrance hall of the museum. A century ago, in addition to the research carried out here, the first exhibition of rocks was opened as if it could be visited by the general public, in the „Collections” hall on the ground floor. 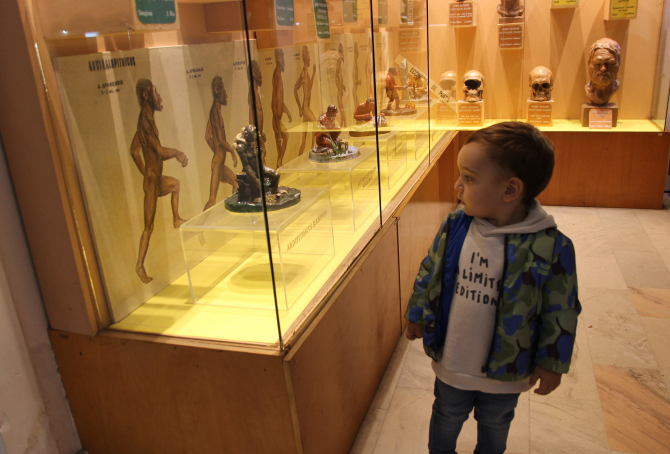 A lesson at the museum Photo: Crișan Andreescu

The same museum, very well placed, „La Șosea” (at the Big Road) - as it was called in the interwar period to the present Kiseleff - welcomes us today with the same mysterious air. First, we meet some giant geodes and some authentic dinosaurs. This is where the World started. If we want to find out its mysteries, we enter through the gate and go back to the past, where the enigmatic rocks await us, to tell us each its story. From the entrance, in the first room on the right, two exhibits await for us. There are two huge geodes, over 200 kilograms each, specially brought to Bucharest, for the National Geology Museum from Brazil. Once we meet the secretive elders of the secrets in the heart of the mountains, we can go further, to find out the story of the Earth, told by the most beautiful precious and semi-precious stones and by the rare metals and minerals.

The National Museum of Geology in Bucharest is perhaps more valuable than a gold mine, one of silver and one of diamonds, in one place. Not only by the unique rocks it harbors, but also by the scientific value of the exhibits. Another spectacular room is the one of the mine flowers, where we meet the rhodocrozite, white and pink, known to the ladies, because from this semiprecious stone there are made many jewels. I asked the head of the marketing and communication department of the museum, Ramona Bălăcucuță, to tell us the most beautiful stories of the museum, to introduce us to the mysteries of the rocks. After we passed the hall of the two giant geodes and the one of the mine flowers, the next spectacular attraction was in the basement. 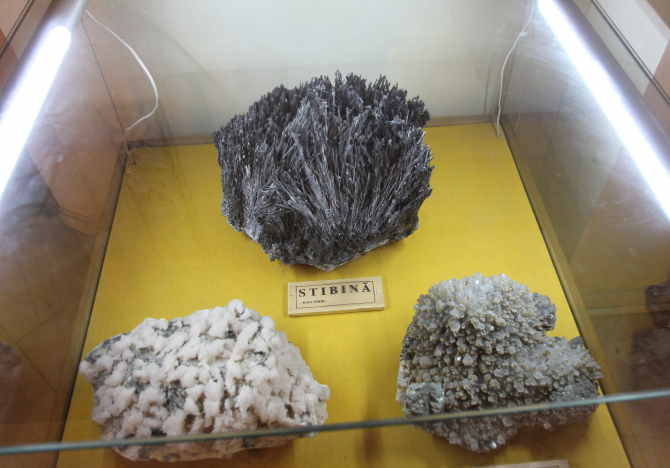 “The fluorescent mineral room in the basement of the museum is spectacular because the minerals are exposed under the UV spectrum in the dark. There are also pyrite samples - called the „gold of fools”, because in ancient times, people brought pyrite from the mountains, believing they had discovered gold. Pyrite is a metal in the form of cubic crystallization. The specialists have different opinions about what would be the most valuable exhibits in this museum. There are pieces with a great heritage value. The museum holds true treasures, including samples of native silver and native gold, but not all of them can be seen by the visitors, having a very high heritage value. Otherwise, each stone hides a story. A researcher can talk for more than three hours about a small garnet, because each stone has its own history. These are the stories of geology, of Romania, of the Planet, from its formation until today”, explains Ramona. 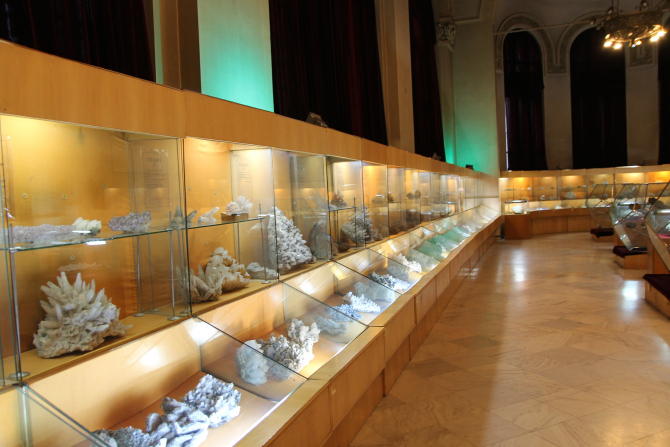 „Jewelry” of the Museum of Geology Photo: Crișan Andreescu

The museum has 14 rooms that host the permanent exhibition, each room having a certain specificity. Very attractive to all categories of visitors is the part of paleontology, here being „hosted” fossils of millions of years, dinosaur eggs, including the museum mascot, the dwarf dinosaur from Hațeg. On their footsteps, we go back, in time, to the Cretaceous, then beyond, to the moment in the Universe that led to the formation of the planets, to return to our days, after a time and outward journey. It's a museum open like a book.

Dinosaurs are... fed with biscuits!

This is where many visitors from different categories come in daily. Most often, the students who study Geology or Geography enter the gate of the museum daily, because here they can study the secrets of the Earth. „Students make practical applications in the museum. We have partnerships with the universities in Bucharest and we focus on education. The students from the universities and from highschools come to see how the research is done, we provide our specialists and a mineralogy laboratory and laboratories where they can work with the best performing machines Romania has. Here you can meet researchers in mineralogy and crystallography, but also in paleontology. Also, students have access to many samples that cannot be visited by the public. We also have an important educational team”, says Ramona Bălășcuță. 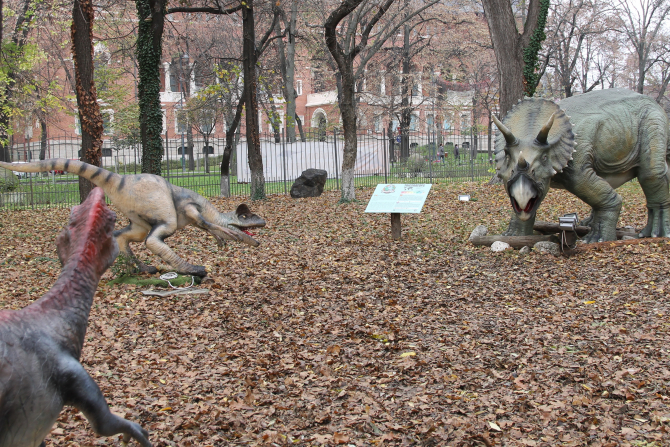 The highschool students are also attracted to the museum, but the happiest are the children. And their great pleasure is to... talk to the old dinosaurs, which they feed on. Most „empathize” with Triceraptops, in the dinosaur garden. The children comfort him, talk to him and even pull him by the tail, but they also feed him. Always, next to old Triceraptops will be found biscuits, from the children who worry about him. „At four meters long, Triceraptops is exposed outside and children are likely to empathize with him, considering he is not properly nourished. The little ones impress us because they know all kinds of dinosaurs. I met a five year olds who can talk about dinosaurs in Romania. Many of them keep their food and put it on the ground”, says the museum representative. Here can be made educational programs, structured by age groups, and the most attractive that one for children who make dinosaurs from kera paste. Most of the time, the little ones consider the right color to be pink, even with bubbles, without bothering the opinion of the specialists.

The museum is also an attraction for shopping enthusiasts. It is open from Monday to Sunday, between 10.00 and 18.00, without a break, as well as the souvenir shop that houses it. The visitors come here to buy jewelry with precious and semi-precious stones, and every month, the museum organizes exhibitions for sale, attended by about 4,000 visitors in a weekend. Many of those who come to the exhibitions are also fond of crystallotherapy, and their belief is that man does not choose the stone, but the stone chooses man.

November was a month full of events for the Museum of Geology, the most important being the temporary exhibition „Treasures and testimonies of the treasure. Minerals. Artifacts of precious metals and semi-precious stones. The Emil Constantinescu collection”, with objects received by the former President of Romania, who is a geologist, throughout his entire activity. The most spectacular piece of the exhibition is a topaz. The exhibition can be visited until the end of the month.

Dinosaurs
Lovers of rocks. the Museum of Geology
shopping
Stibine 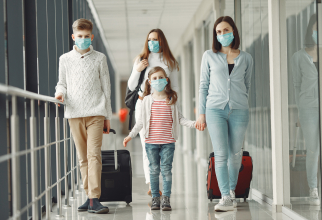 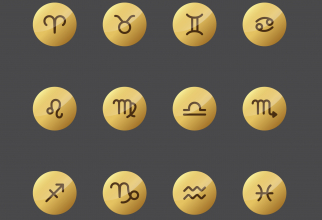 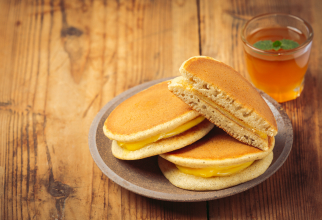 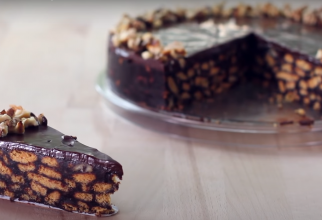 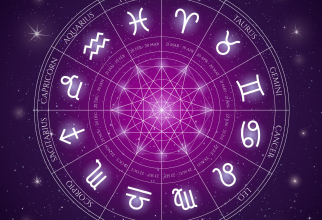 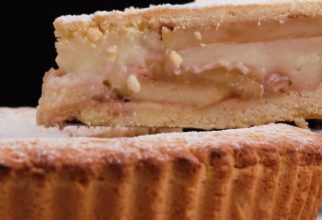